1.  A nostepinne.  A classic, no frills, no fuss yarnwinder.  I like this purple one I found on etsy, made by ScottsMountainCrafts. 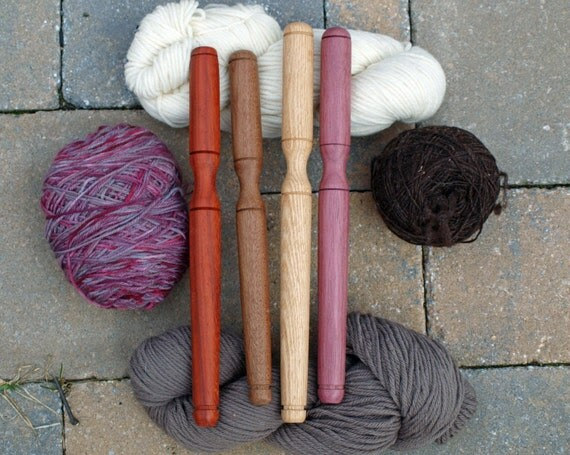 2.  A crochet stitch dictionary/encyclopedia.  This one has been in my amazon cart for a few months now: 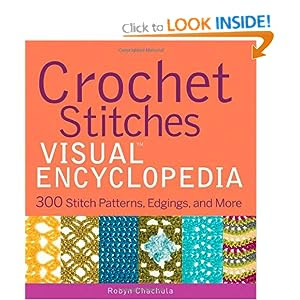 3.  Clear storage totes to help organize my crafting space.  (Small ones for individual projects would be so very great!)

4.  An ergonomic crochet hook or two (just to give them a try).

5.  A renewed subscription to Crochet Today. 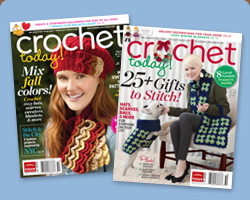 6.  Thread.  Yeah, it's kinda lame, but my stock is limited and it's nice to have on hand when the sewing mood strikes. 8.  And of course, to go with the Cricut, a big fat pile of cardstock in all the colours of the rainbow.  (Drooling, now.  Just a bit.)

I actually dreamt about my blog the other night.  Is that the sign of a growing fascination or what?  I dreamt that I found this (admittedly ugly) quilt that I had made and I was beside myself with confusion over why I hadn't already posted photos of this FO in in cyberspace.

With Christmas on the way, it has been a prolific yarncrafting month, for sure.  I have finished a few projects recently, of which I can provide some sneak peaks, but first off, let me showcase the work of my wonderful friend, Jenny who became a student of crochet this very weekend. (Yay, Jenny!)
Jenny is making a hat to fit a one-year-old.  We picked out a bulky yarn so that the pattern works up quicker and her choice of variegated yarn makes a simple project look a little bit more sophisticated.  (The yarn is Loops & Threads Charisma in "Northern Lights.")

Someone once told me that your first crocheted object should be something you give away and I like the idea of starting small, with something that doesn't require a lot of materials or a complicated set of skills.  I opted to use the First Fall crochet hat from Lion Brand as a general guideline.  This is a simple pattern that's easy to adapt for different sized heads and only involves crocheting a rectangle.

Jenny was an excellent first student, but we faced two dilemmas:
1.  We have a long-distance friendship and only get to see each other on a few weekends per year.
2.  I'm a leftie.  I crochet everything backwards!

Both problems were solved with the help of YouTube.  We found some great little two-minute video clips to watch, and Jenny can refer back to these when she needs a refresher.
I am so pleased to have helped someone else to start a hobby I love.  (And who knows?  Maybe I'll have her blogging about it soon, too. ;)

Here's a sneak peak of part of a baby gift I'll be mailing off tomorrow.  I turned the leftover scraps into a little boy beanie.  As for sizing, I'm hoping it's newborn-sized! 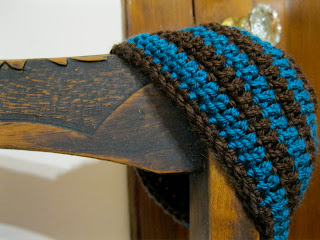 The yarn is Red Heart Soft in Chocolate and Teal.
I used an H hook throughout.

I am awarding myself the luxury of blogging before work, with the hopes that it will help wake me up this morning.  The coffee is doing its part as well.  This soft and lofty bear hat is the result of reading several hat patterns on the internet, trying a few and then coming up with my own.

To give credit where it's due, I used the instructions for Alli Craft's fuzzy bear hat for the idea of how to make the ears and the mini flower is a very simple pattern from Attic 24. 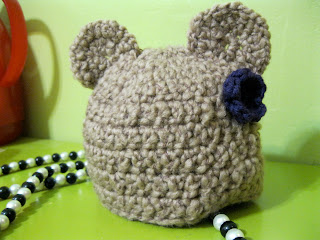 Yarn and Hooks Used:
-Bernat "Harmony" & "I" hook to make the hat
-a scrap of Loops & Threads "Impeccable" and an "H" hook to make the flower
-you'll also need a safety pin and a yarn needle to work in the ends

To Make the Hat:

Fasten off yarn and weave in ends.  (Tip: When using any kind of bulky yarn, I find it easier to use a safety pin as a yarn needle, since the eye of my yarn needle is just too small to thread thicker yarns.  I'll try to add a picture soon to show what I mean.) 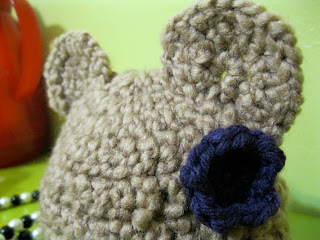 To Make the Ears:  (You'll need two, of course!)
(Thank you to Alli of Alli Crafts for your clear instructions on how to make bear ears!  I think big ears look cute on babies, so I made big ears for the hat, too.  If you're a fan of smaller ears, follow the steps on her blog to make a slightly smaller pair.)
1.  Make a "magic ring" and work 6 sc.  Hold the stitches and pull so it makes a half-circle of stitches instead of a regular full circle.
2.  ch 1, Turn. Work 2 sc in each sc from previous row.
3.  ch 1, Turn.  Work *2sc in 1st stitch, 1sc in next stich* (repeat this pattern across the row)
Fasten off, leaving a long tail for sewing the ear to the hat.

Sew the ears to the hat, using the tails from fastening off.  (Again, I threaded the yarn on to a safety pin.)

Embellishments:
Make a flower, following the instructions at Attic 24.  FYI, the instructions at this site use British terms, which vary from American terms.  (Basically, it's just 10 sc in a magic ring, followed by a round of *dc+hdc in next stitch, sl in next stich* to create a 5-petal flower.)  When you fasten off, there's no need to weave in the ends.  Use the tail to sew the flower to the bear hat. 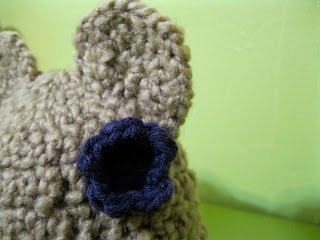 I had my first Starbucks Christmas Blend today.  There are officially no other big holidays between now and December 24, so the lead-up is now in full swing.  Christmas crafts are starting for me, too.  My attempt to finish the 2nd Christmas stocking did not go as smoothly as planned.  Although I used the same type of yarn and the exact same hook, the green stuff did not work up as firmly and the result was a much looser, lumpier, ugly thing.  I'll have to pick up another ball and try again; perhaps I'll break with tradition and go for purple this time.... 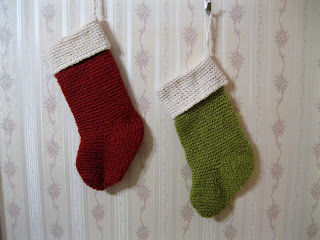 We got some shopping in this weekend, although not really of the holiday variety.  I think it was just to build stamina for the hard core Christmas shopping to come.  There is a really cool store in Shakespeare called That Perfect Piece where I found these two vintage tins.  I'm going to put them in the kitchen and use them to store baking things that only come out on special occasions, like sprinkles, chocolate chips and all that fun stuff.  (I just love the cows one.) 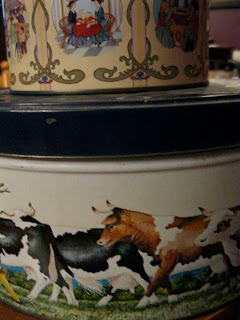 We also hit up two bazaars this weekend.  I'm kind of in love with bazaars at the moment and I'm dreaming of setting up a table for at least one craft sale next year.  We found some really neat stuff, like these hot/cold bean bags.  The brightly-coloured one is a neck roll in a long tube.  Both have soft flannel covers that slip off for washing (smart idea). 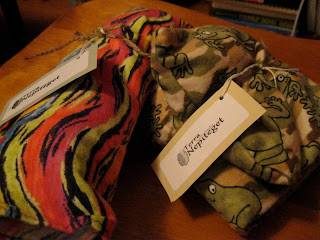 We also bought some really cool hand-stitched cards, made by a local crafter, Tammy Merkus   I totally want to try this type of crafting someday. 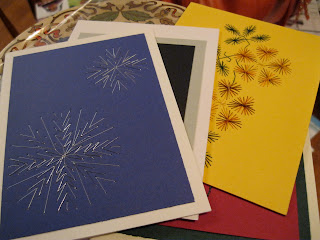 I also finished a baby blanket this weekend and I'm looking forward to blogging it, but the recipient gets to see it first. ;-)
Posted by Lyndsay at 8:16 PM No comments:

Links Within My Blog

Lyndsay
I'm a teacher, an avid book reader, and a full-fledged member of the net generation. I love to dabble in all things crafty. ;) 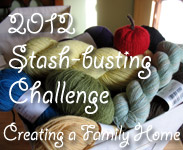